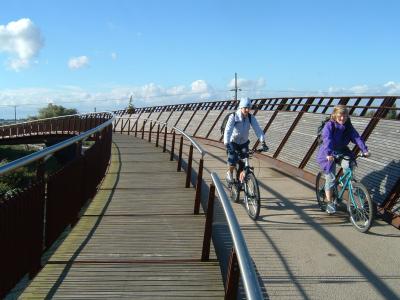 The Green Wheel network of cycle routes provides over 45 miles of continuous sustainable routes around the city.

It was one of the first large scale projects Peterborough Environment City Trust (PECT) delivered for Peterborough and first opened in 2000.

Not only does the Green Wheel contribute to a sustainable transport system, it also celebrates over 3000 years of social, cultural and economic history through colourful interpretation boards and a series of sculptures.

This £11 million project was 50% funded by the National Lottery through the Millennium Commission, matched by contributions from public and private businesses and voluntary organisation.

Ongoing improvements:
Since it was first opened the City Council and PECT have been working together to enhance the route including improvements to the surfacing, signage and interpretation.

In 2008 PECT carried out a detailed survey of the route to identify areas for enhancement and to prioritise these.

Since then, the City Council has arranged for a 4km section of the Green Wheel to be improved near Peakirk including re-surfacing and new gates and cattle grids.

A pond was also constructed adjacent to the Green Wheel near Stanground Lock for biodiversity and educational visits.

The Shanks Millennium Bridge over the River Nene at Stanground Washes provides a direct, safe and fully off-road link between Peterborough and Whittlesey for commuter and leisure cyclists, horse riders and pedestrians.

It also forms part of the National Cycleway Network, making Peterborough a gateway for routes into East Anglia from the Midlands and the North.

This outstanding bridge, designed and constructed by Whitby Bird & Partners, is constructed from weathering steel which prevents the bridge from corroding and eliminates the need for painting.

It is manufactured partly from recycled metal and has been carefully designed to minimise any disturbance to the birds that live and breed on the Nene Washes.